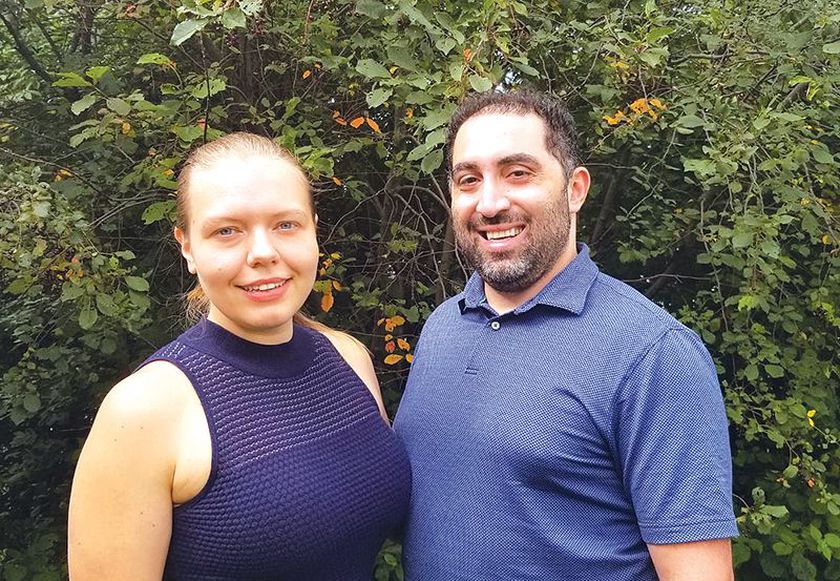 A new dental clinic is expected to open in Elliot Lake this fall.
The Soleil Dental Clinic will be owned by two dentists, the husband and wife team of Kaveh and Svitlana Mirsaeidi.
The Soleil Dental Clinic will be located at 2 Brunswick Walk, across from ScotiaBank.
Kaveh and Svitlana Mirsaeidi had been practising in Sault Ste. Marie, and came to visit Elliot Lake. Kaveh also had a brief stint as a dentist in Sudbury, before moving to Sault Ste. Marie.
In the early summer of 2019, Kaveh began a partial practice at the Hillside Dental Clinic. Svitlana also started a partial practice in Hillside Dental Clinic in late […] last year. However, in January of this year, they moved to Elliot Lake and began their full-time practices here.
Wanting to get out on their own they opted to purchase the former wine and brew building at 2 Brunswick Walk. They are in the midst of renovating the structure, […].
“They have to do significant renovations to that building to bring it up to dental office standards,” says Kaveh.
He says he expects the Soleil Dental Clinic to open in late October or early November.
He adds that the renovations are costing more than [$800,000], a large part of which is for the HVAC system they plan to install.
“Ventilation is more important these days because of what has happened with the pandemic.”
“You have to have a good fresh air supply.”
With the large HVAC system, he had engineers examine the structure and they are strengthening the roof.

Dental training
Originally from the Ukraine, the couple graduated from the University of Toronto’s dental school in 2018, allowing them to practice in Canada.
However, while they are general dentists they do have some specialized dental training from the University of Alberta, which dealt with sedation.
The sedation is not like when undergoing surgery at a hospital. It is not a general anaesthesia, which requires an anesthesiologist to administer; this is a lot milder. While the patient is asleep it is not a deep as with general anaesthesia, he explains.
It is used on people who have a lot of anxiety when they need dental work done, he says.
Kaveh says to sedate a patient they use nitrous oxide (laughing gas). If it is not enough they can use medication as well as.
However, even with nitrous oxide they still use a local to freeze the area of the tooth that will be worked on.
Kaveh says they will be accepting new patients when the clinic opens. They will also accept all private and public dental insurance plans, as well as major credit cards.
Kaveh says they can also do some denture work, such as denture adjustments and repairs.
He adds that for many of the repairs they would be able to do it in town, so they would not have to be sent out, which can sometimes mean a wait of two weeks or more.
“When it’s something I can repair on the spot here it would be ready the next day.”
They can also take a sizing for new dentures.
He says for that work the sizing is done digitally. They do not put molding material in a person’s mouth.
“So there won’t be any gooey stuff running down the throat,” says Svitlana.
“I’ve had some patients who couldn’t tolerate the molding material in their mouths, they would gag. But digital dentistry addresses all of that,” he adds.
Instead, they use a special scanner that looks like a toothbrush. It takes pictures and the measurements of inside the mouth, explains Kaveh.
“It’s more accurate; it’s clean; it’s fast.”
He adds that the information is then emailed to the manufacturer. Within 15 minutes of the procedure, the manufacturer has what they need to make a denture. In the past, it could take a week for the mold to reach the manufacturer in Toronto. The same procedure also works for crowns.
They also use a digital x-ray.
“Digital dentistry means that all the x-rays that are taken are processed immediately on the computer, not in solutions or not in any fluids that have to be replaced. It’s an instant image and the quality is more superior, and the exposure to x-rays are lower for the patient,” explains Svitlana.
She adds that all their records will be stored digitally in the computer.
“Everything is accessible in an instant. You can go back and see what has been done and how something has been done.”
He adds all these technologies make a big difference.
He says when they open to make a dental appointment call 1-888-366-2360.
They say they expect to have a number of staff working in the Soleil Dental Clinic, including: a receptionist, dental hygienists and one person to sterilize all the equipment, as well as the rooms where they will work on the patients.

Previous work
Prior to becoming a dentist, Kaveh was a design and architectural engineer working in Waterloo.
Kaveh when he was an engineer he was working largely in the corporate world. He likes to work with people on a daily basis, but in the corporate world of engineering he didn’t have much opportunity for that.
“There is a big gap between the engineer and the client.”
He says there are a lot of things that got in the way such as the business, sales, management and more.
“So, it was hard to see the direct effect of my work on somebody’s life. But that’s not the case in dentistry because what I do directly translates into an improvement into somebody’s life.”
He adds that is wife is also well-educated and has several degrees, including two in dentistry and an English literature degree.
Svitlana says she opted to go into dentistry because it was a natural jump for her. Svitlana’s mother was a dental surgeon back home in Ukraine. She remembers helping her mother since she was about nine years old.
Her mother was also a professor at the university where she first went to dental school.
After completing high school, she enrolled in the dental school at the university in Ukraine at the age of 14 and got an undergraduate degree in dentistry. In Canada, with her undergraduate degree she attended the University of Toronto for dentistry, and graduated with her husband.
Kaveh says they opted to leave larger cities and move to Elliot Lake.
“Elliot Lake worked well for us. We like the people, they’re friendly. The nature is good,” says Kaveh.
“It’s quiet and there are a lot of trees,” injects Svitlana. “We moved from downtown Toronto where they have trees on the roofs of the condo buildings.
“In the Sault, we lived just outside of the Sault on Highway 17, so it was still very busy.”
Kaveh added, “A small community, a close-knit community is what we were looking for. And Elliot Lake seemed like the right spot to settle in.”
They also believe Elliot Lake is a good place to raise a family.
They plan on being in Elliot Lake for a long time.

nextDid you know whitening toothpastes tend to wear off fillings?

Have been to our practice before?